My dad’s family, here for many generations, was instrumental in bringing the first Catholic priest through the Cumberland Gap into Kentucky.  My mother, at the ripe out age of three, escorted her family to America, last port of call, Dublin on March 17, 1911.  In the height of the great depression, my dad said “I might starve to death, but I am not going to freeze to death”.  My mother’s doctor suggested that they “Go South”.  Houston became home.

Years later I was born at St. Joseph Medical Center, greeted by my parents and a group of Irish nuns, who would take care of me for the first months of my life. One day realizing that this baby was thriving and not dying, they promptly had a candle light vigil outside of St. Joseph in thanksgiving.

Our home was filled with Irish stories punctuated with anecdotes, family history and clever saying, but the Irish celebrations were not the size and scope of today.  Once a year, it amazed me to hear Irish music on the radio, woven between the hilarity of the two radio personalities, Tim and Bob.  Spending most of the sixties in San Antonio, I returned the early part of 1969 to finish my education at the University of St. Thomas.  Thus began the “Modern Era” of my Irish celebrating.

Tim and Bob turned over this “Brain Child”, Houston’s St. Patrick’s Parade, over to the Irish Community and the A.O.H.  One day, Grif tapped my on the should and said “I need a hundred dollars”.  As I pulled out my wallet, I asked “What’s it for?”  He told me that there is no money for the parade and he need $500 or $600 to keep it afloat.  Within the year, Dr. Edward Kearns, his wife Jeannie, and Grif called us together to form the Houston St. Patrick’s Parade Commission.  This successful venture formed the “Original 45”.  The Parade thrived.

The St. Patrick’s Parade is a platform our family uses to celebrate life, births, illness and death.  Remembering my sister, Kathleen’s illness and death, my mother, Monica’s cancer, my family friend, Jim Storey, who skipped chemo to attend the parade.  My sister, Mary, joined us all the time.  My nephew, Christopher Hagen, would always be hoisted up in his wheelchair by one of the firemen in the hose bed of a firetruck so that he could see.  Mary’s son, Paul Hagen, entertained the parade by riding his unicycle as he juggled.  My sister, Patsy, traveled to Houston for several parades.

Cissy and I announced our engagement at the St. Patrick’s Parade in 1988 to the sights, sounds, lights, bells and sirens of the 15 antique fire engines.  Jim Foley made it official by announcing the news from the reviewing stand on Main ST. in front of Foley’s.  Please note, it was an “overnight romance” as we dated for 7 years.

Twelve years earlier, a great friendship began at the parade with Chuck Buschardt, a local fireman and one of Houston’s first EMT’s, bought and restored his first antique fire truck.  His first parade was March 17, 1976.  And, yes, we celebrated his wife, Marla’s life at the parade the year she died.

These memories will be embraced with a toast raised each year to Doc and Jeannie Kearns, to Monica, Kathleen, Christopher, Mary, Patsy Jim, Marla, Joe and always to the our great firemen.

Irish Memories.  Remembering my life and the Parade.  I have been blessed to be at the right place at the right itme.  Always remember, we are stewards.  My aim was to preserve this heritage until Sean Kearns could mature into the role that would make his grandfather and grandmother  PROUD!!

On our 60th, March 16, 2019, these are but a few on my Irish Memories of the fifty years and my joyful confidence in the next sixty. 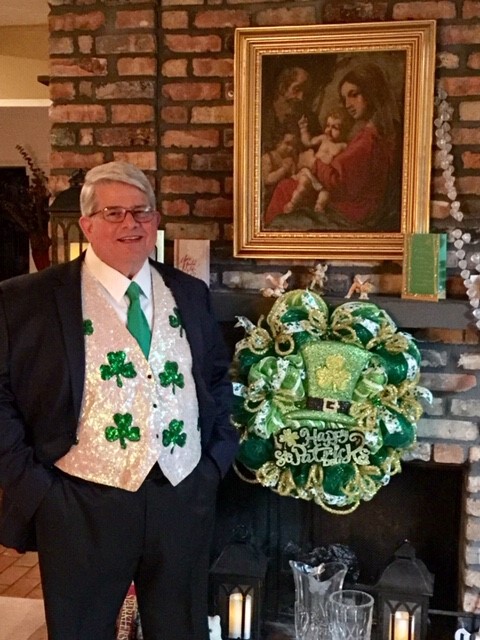